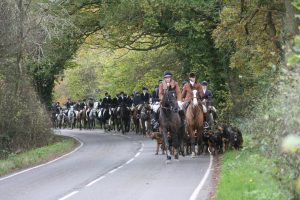 MASTERS OF BLOODHOUNDS AND DRAGHOUNDS ASSOCIATION

Our Annual Hound Show is undoubtedly one of the highlights of the Association’s year – Peter 2015 did not disappoint.  Phil Broughton, Association Chairman, speaking immediately following the Show at the AGM, congratulated all those involved with the Show and commented there was a record entry.  With appearances by new packs, and new packs poised to join the Association, standards continued to improve and general comment from spectators was fully supportive.

This year, with our show ring outside, it created a more natural environment, however the forecast weather worries materialised with cool weather, culminating in a couple of showers.  Our Judges, Edward Knowles, Waveney Harrier and former huntsman/master of the South Dorset, and Colin Ashmore, international hound judge and bloodhound winner at Crufts, had the usual 5 classes to work through, with unentered dogs, entered dogs, unentered bitches, entered bitches and couples.

INVADER STRIKES FOR ANOTHER CHAMPIONSHIP
For the bloodhounds, with 5 packs forward – Coakham, East Anglian, The Farmers, Highmoor (new this year), Isle of Wight Farmers – attention always focuses on the two main breeding packs, Coakham and East Anglian, but the three other packs were well-represented in the ribbons.  The first winner of the afternoon in the unentered dog class was the East Anglian Darkness, a well-balanced hound with a good depth of stride and, from The Farmers, Ostler also did well.  However, in the entered dog class, which is always very competitive and this year with 18 entries, it was last year’s Champion, Coakham Invader, who again caught the Judges’ eye.  The Highmoor did exceptionally well to produce Rockford to come 2nd in this class.  Connor, in the unentered bitch class, repaid all the hopes and made the 3.30am start worthwhile for all the Isle of Wight supporters, by winning.  “Delightful” was the Judges’ opinion.  Showing the Coakhams depth of quality, Debra won the entered bitch class from 15 entries, with Isle of Wight Empress capturing second and litter sisters Coakham Honey and Humble, previous winners, well-built and working with enthusiasm, took the couples class.

Local bookmakers had shortened the odds on Invader retaining the Championship, which he duly obliged for Nick Wheeler, from Ashburnham, East Sussex.  Colin Ashmore commented after the class: “for showhounds, not only do they have to look fit for purpose but fit for function; coming here today to see proper working hounds, he wanted to see the breed standard and confirmation of the construction of the hound must come to the fore – this was a most important characteristic of the winner, Invader”.

KIMBLE COMES OUT TOP
The Draghound classes were again fully represented by the Berks & Bucks, Cheshire and Sandhurst & RMA – all the 3 huntsmen know each other well.  The first class, the unentered dog class, although the Berks & Bucks had brought a large entry from their Lambourn base, it was David Harvey’s Cheshire Riddick, a blue-mottled hound who came out on top.  Again, the very competitive entered doghound class, produced a lot of interest with former champion Berks & Bucks Archer II beaten into second place by his kennel-mate Kimble, who had grown on into a very solid impressive hound.  Mark Beckett, Sandhurst & RMA, produced Gateshead 08 for third.  A big entry was quickly sorted out with Berks & Bucks Rattle taking the unentered bitch class, and Cheshire Stephanie taking second for David Harvey, coming back this season to hunt the pack.  Again, in the entered bitch, and also the couples, the Dumfriesshire breeding drew the Judges, within the bitch class Berks & Bucks Ariel and Arctic taking first and second places with Sandhurst Butterfly in third.  The couples class went to the incredibly attentive and well-matched Riddick and Ramsden for the Cheshire.

For the Championship, the Judges soon settled on Berks & Bucks Kimble to go one better this year and take the Championship for a very happy Andrew Clarke.  Edward Knowles commented “the hound was well-balanced and moved athletically across the ring”.  We subsequently learnt from Andrew Clarke that his hound had been reserve English Champion at Minchen Hound Show, South Wales, only beaten by the Mendip Farmers who traditionally have strong Beaufort blood lines.

In his closing thanks to the Judges, Phil Broughton thanked all 9 Huntsmen for their efforts in supporting the day and bringing hounds forward in such good order and to Roger and Fiona Clarke on their retirement.  Both have been a strong influential voice for bloodhunting having done so much to improve hound breeding nationally and provide sport in the Eastern Counties.